What Is Computer Science For Kids? How to Get Kids Started Coding 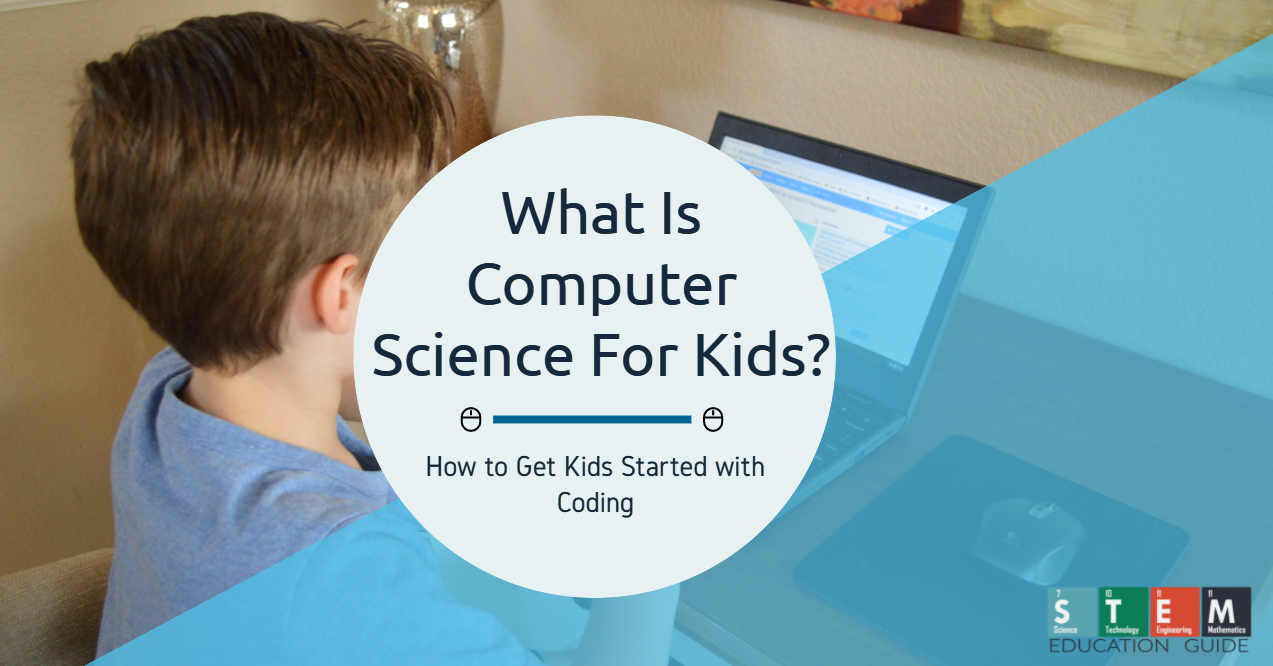 Computer science is an exciting, ever-changing field with a lot to offer.

It is no surprise that people of all ages are interested in how to find out more about it, especially children.

But what exactly does “computer science” mean, and how can kids get started off learning about it?

What Is Computer Science?

Computer scientists think in algorithms. These are a series of steps that a programmer tells the computer to follow in order to solve a problem.

These problems can be as simple as sorting a list of numbers from smallest to largest to as complicated as finding the best way to send encoded messages that can be understood by the receiver.

Is Coding Considered to Be Part of Computer Science for Kids?

Coding is an extremely important part of computer science.

It is the part that involves a coder, or programmer, telling a computer what to do. Like any form of communication, it happens in a particular language.

If you think your kid or yourself is interested in coding I wrote an article about interesting and fun coding tools.

There are hundreds of different programming languages that are used in different ways for different kinds of projects.

As well as creating programs, computer science also includes the design and building of robots of different forms. They are built out of specific parts and can either act on their own or under the direct control of the person who built it.

Coding might sound hard, but I’ve found many great ways to introduce this essential aspect of computer science to kids so they can start making their own programs in no time!

What Field of Study Is Computer Science for Kids

Computer science is a field that covers a huge number of areas. It is most directly related to math since it improves analytical skills and the ability to solve specific, well-defined problems.

However, all of science and engineering nowadays uses computer science.

Physicists use computers to make models about situations that can’t be reproduced in the lab, such as what happens inside of stars.

Biologists use computers to simulate different populations of animals and see what would happen when the environment is changed in different ways.

As well as being an important science in its own right, computer science is also one of the most powerful tools used in all areas of STEM, not to mention modern day life.

What are the Basics of Computer Science

Computer science is a constantly evolving field with the programming languages and ideas being used by experts in the field changing all the time. Fortunately, the basics stay the same.

The best way to get kids started with computer science is to get them starting to write programs!

Any professional programmer will tell you that you need to learn by experience and pick up or research the ideas you need as you go along.

Depending on the age of the budding programmer, you might like to start with Scratch or with Python, two programming languages that are described in more detail below.

The nice thing about these two languages is that the commands are all very sensible and it is easy to find help if you get stuck.

Scratch is very visual and hands-on, with the ability to create programs by dragging and dropping instructions. Python programs are made by typing instructions into a window, but are much more flexible and powerful, allowing for more complicated programs to be created.

Once you have started to get the hang of what the programming language you’re using can do it’s time to push your limits.

The best way for kids to practice what they know while learning something new is to have a goal to work towards. The best goal is something that is interesting, so most people try to create something that they’d want to use.

One great way to start is to program a game. It might be finding a way to turn a game that already exists into program form (for example checkers or tic-tac-toe), or to create something completely new, like a choose your own adventure game.

Games aren’t the only things that you can learn to program with. Some people start by making apps for their phones, creating an automatic word search generator or even a program that translates regular text into pig Latin!

The possibilities are limited only by your kid’s imagination.

A fantastic way to spark interest in computer science is to have kids do something where they can directly see the result in the real world instead of just on a screen.

There are a multitude of different robotic kits out there which do different things at various levels of difficulty. Here is a list that we recommend.

Finding one that is suited to you and your child is a great tool to increase their understanding of programming and seeing how powerful it can be.

Once they have the fundamentals of programming down, one next possible step is to learn about tricks and techniques that have already been discovered.

An algorithm is a particular method of solving a problem, and different algorithms are used in different situations.

These ideas are more advanced than the ones already talked about so far and really require an intermediate knowledge of computer science and coding to get started with.

That said, it is a great next stage for advanced learners or older kids.

For example, imagine you need to have a computer sort a list of numbers from smallest to largest. How can you do it? This is one of the simplest kinds of tasks a computer can do, but Wikipedia lists over twenty different algorithms for sorting lists like these.

They all have pros and cons and knowing the right algorithm for the right task is an essential part of computer science.

There are a huge number of different places to start learning about algorithms and how to use them, but a great place for kids to start is through some of the later courses on code.org.

This website has a great series of lessons and courses that introduce kids to the fundamentals of computer science and programming.

How Can Kids Get Started in Computer Science

The great thing about computer science being more a frame of mind and way of thinking than a specific set of skills is that there are loads of ways to get started.

The best way to get kids started in computer science is to get them involved in coding and writing their own code.

Computer science and programming is really a lot more creative than most people give it credit for.

You wouldn’t expect kids to start learning about art without drawing pictures or learning about music without playing an instrument. With computer science, it’s essential to start writing code and making programs!

Another way of introducing kids into coding is by helping them build their own computers. In this post, I go over the best build your own computer kits.

Getting Kids Started With Scratch

One great way to get younger kids started is using “Scratch” – a method of programming for kids designed by computer scientists at MIT to get kids experimenting and learning the fundamentals of programming. (link to scratch.mit.edu)

The name comes from the mascot, Scratch the cat. Scratch has a collection of blocks, each of which gives a different kind of instruction to Scratch.

It might tell her to take 10 steps forward or say hello, or even change colour. The young programmers make a program by arranging a series of blocks to get Scratch to carry out the tasks in a certain order, and the challenge is to find a way to write instructions to get her to do what you want.

One of the great things about Scratch is that as well as the wide variety of programs you can create yourself, you can also see the popular programs other people have made.

Not only does this provide inspiration to see what kind of things can be created, it also allows your kids to learn new programming techniques from others.

Getting Kids Started with Python

Older kids who want to start with something more powerful or know a little bit about the basics of computer science might like to start with Python.

This is a real programming language used by coders to write a wide range of programs in the real world.

Getting started with Python is as simple as downloading the program from their website python, and starting to code!

Realistically you’ll also need to find an introductory course to Python. Fortunately, it is such a simple and powerful programming language that dozens of free, high-quality beginners’ courses can be found online.

Getting Started With Robotics for Kids

Making and controlling robots is another part of computer science separate from coding.

Many kids who aren’t interested in traditional coding might be able to find a way into computer science through robotics. On the other hand, those that love coding can use robots as a way to test their skills.

There are thousands of different robotics kits out there that all have different purposes and requirements.

I recently wrote my thoughts on the best robotic kits for kids.

Some focus on the physical process of designing and building the robots which appeal to those who love to create things and do things with their hands.

Other kits use more advanced pre-built robots as a tool to teach kids more about coding. These ones focus on providing kids with a way to put their programming skills into practice and find ways to have the robot complete complicated tasks.

Ultimately, the path you choose to introduce your kids to computer science should be whichever one they are going to enjoy and get the most out of.

How Computer Science Will Help Kids Throughout Their Life

Computer science teaches a wide variety of skills that will be of great use to anyone.

People at all stages of life are looking to find ways to learn more about it to improve their understanding of modern life and open themselves up to a wider range of possible jobs and markets.

Getting kids started at an early age gives them a huge advantage in their later lives.

It’s rare to find any job these days where being able to write programs in some form wouldn’t be an advantage that makes the job easier or more efficient.

Computer Science Outside of School

Even in jobs where computers wouldn’t have been used 10 years ago, knowing even the basics of coding provides a huge edge over others.

As well as the technical skills being learned, kids who learn about computer science and programming also gain the ability to think analytically, creatively and solve problems.

Creating programs that do what you want them to do requires focus and the ability persevere with a task until a solution is found.

With all these different ways for kids to learn about the fundamentals of programming, there’s never been a better time to start than right now.

If you’ve found a way to get kids into coding let us know down in the comments below and we’ll add the ideals in this article.