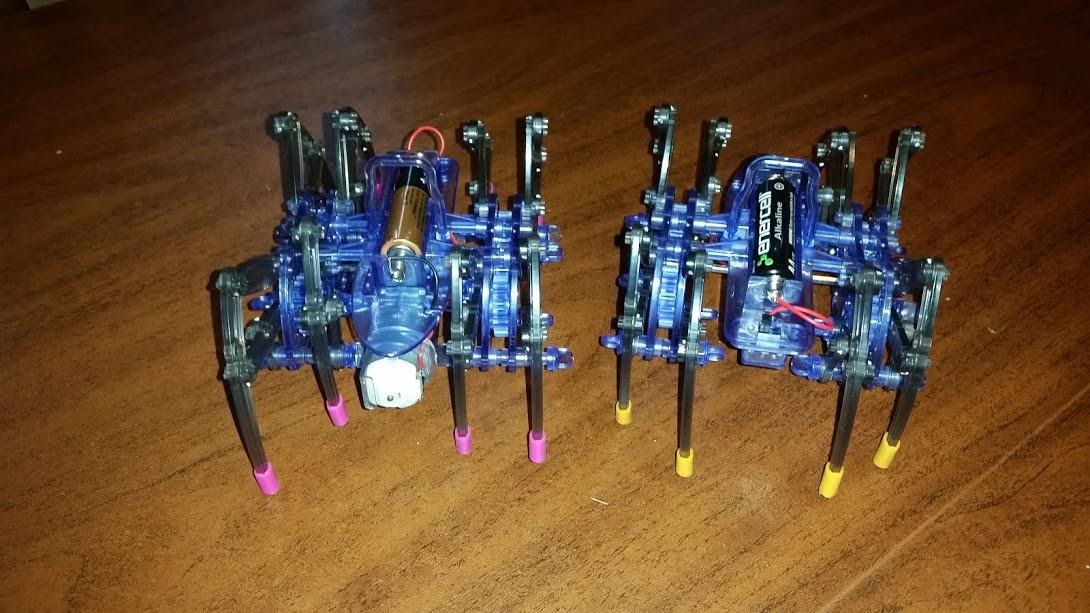 The Spider Robots are coming.

When it is time to introduce your students to Robotics, the Spider Robot is a great option. It is an inexpensive way to introduce the building blocks of robotics.

I have used this Robot in my STEM classes for over five years. When I first started using it, my goal was for students to have something to take home to extend their learning experience.

This DIY kit became a fun, hands-on way to teach my students about electricity, switches, motors, and gears.

Put down your wires with alligator clips and pick up the Spider Robot’s Gearbox.

A circuit is a closed path of conductive material that allows electrical current to flow through the material, like water flowing through a collection of pipes.

If the circuit is open or broken at any point, the electrical current will not flow through. The current can only flow in a complete circuit, so an open/broken circuit is like turning off a faucet.

You can also teach students about conductors (metal wires) and insulators ( black and red plastic coating) since the metal wires are exposed and must be twisted together to make one thicker wire.

The switch on the Spider Robot Gearbox is a SPDT (Single Pole Double Throw) switch.

It has three terminals or poles. The middle pole is the input, and the others are output poles but can be changed depending on how the circuit is connected.

Why is this important? The switch turns the Robot on and off. The switch on the Spider Robot is connected to the motor and the positive wire, so students need to complete a few more steps to assemble the Gearbox.

Gears and Motors are the building blocks of Robotics. Again the Spider Robot’s Gearbox can be used to explain the usage of both. Gears are usually connected to an axle to help the gear turn.

A gear is a simple machine, a type of wheel with teeth around the edges. Gears can change the direction of motion, increase or decrease the speed. A power gear is the main gear that controls all the other gears and is attached to a power supply. It is considered the driver.

The small white gear in the Gearbox attached to the motor is a Pinion Gear, the driver. The next two green gears are compound gears. The first compound gear is also a contains a worm gear.

Worm Gears reduce speed and change the direction of the gear rotation. The second compound gear is an idler gear. An idler gear is placed between two gears.  The last gear in the gear train is a driven gear, a spur gear. Spur gears work together in a gear train to transfer energy from the driver to the other gears in the gear train.

Gears are fascinating, and now it is time to build a gear train for the Spider Robots’ legs. Students use spur gears to build this, and it is easy for them once they line up the gears.

The Spider Robot is one of the best teaching tools for students from kindergarten to twelve grade, and it is really affordable.

Monica Burch is an Electrical Engineer and founder of ConstructU, which creates and delivers STEM workshops from Robotics to Programming for students in Kindergarten to 12th grade.

Monica is passionate about education and educational enrichment. Her goal is to expose as many children as possible to STEM because she believes that students who grow within a STEM environment are destined to become our leaders, our entrepreneurs, our scientists, and our engineers.

Before starting her own business, Monica worked as a Power Engineer, Systems Engineer, Programmer, and Data Analyst. She served on her local Board of Education from 2012 to 2019 and is a ruling elder at her church.

Monica has published one STEM book and two children’s books, “Speedy’s Strength” and “Candma Goes to Heaven.” She has been featured on an iHeart Radio Show, Women in the Loop, and the YouTube channel “Author Story.” She also hosted an online show, “Constructing STEM.” Monica can be found online at constructu.com.