10 Fun Math Games You Can Play With Cards 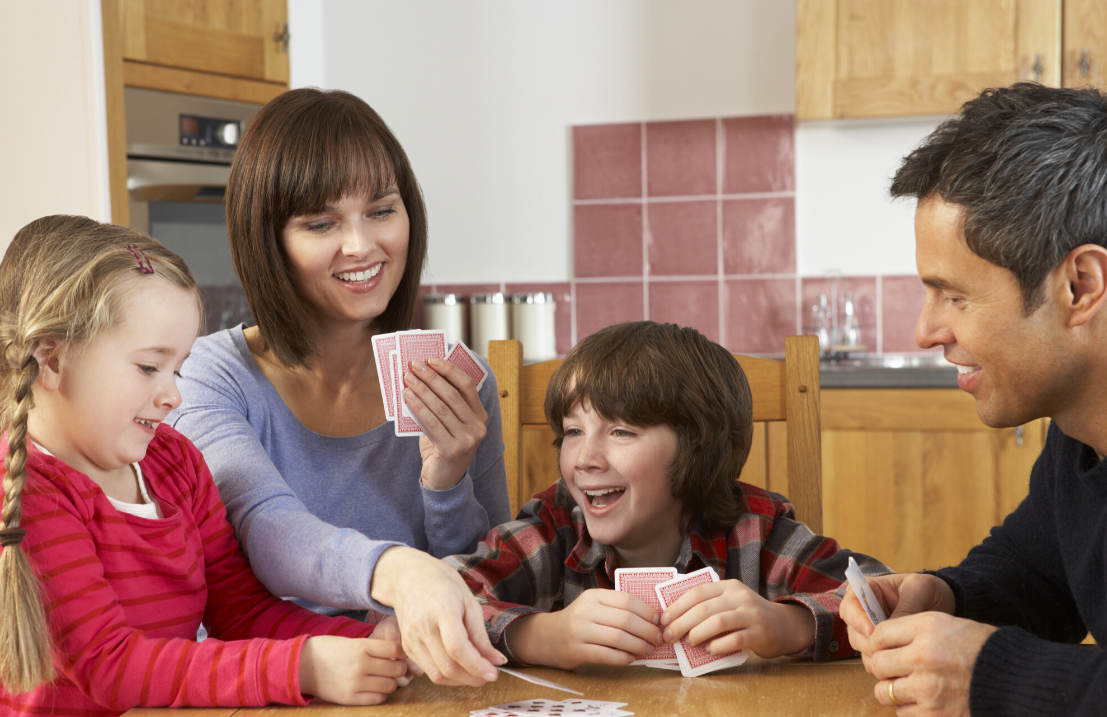 Posted at 17:41h in Activities and Games, Math by Krystal 0 Comments
2 Likes

Need a math game for a road trip or a rainy day inside, but you don’t have any board games or flashcards?

You don’t need them! There are plenty of math games you can play with a simple $2 set of cards. (Or buy a multi-pack for the classroom!)

It’s a great screen-free activity to have fun and practice math. And you can take your deck of cards anywhere!

Here are 10 of my favorite card games to practice different math skills.

Skill Practiced: Greater Than / Less Than

This game is a classic! And, it’s also a great game to practice number orders and greater than / less than.

Both you and your child divide all cards in a deck. You can also play with more people, and deal cards to every person until you have no cards left in the middle.

Keep your cards facedown. On the count of three, each player flips over their top card.

Have your child determine which number is highest. The person who had the highest card wins all of the cards and adds them back to their pile.

If you both reveal the same card, you go to “battle”. Flip three cards over face down. Then on the 4th card, reveal it face up. Whoever has the highest card wins all of the cards.

The game ends when one person runs out of all of

Remove non-numbered cards from the deck.

Your child chooses five cards at a time from the deck.

For each turn, your child lines up the cards in order, from smallest to largest.

Place the remaining cards face down. Flip over the top card from the pile and place it face up next to the pile for discards.

For each player’s turn, the player picks up the top card in the face-down pile or one card from the discard pile. That player must use exactly three cards to make a set that adds up to ten or twenty.

If a player cannot make a set adding up to ten or twenty, they discard one card and the next player goes.

If the player can make a set of cards with a sum of ten or twenty, they place that set down on their turn, pick up three new cards from the face-down pile, and discard one card to end their turn.

The player with the most number of sets at the end of the game wins.

Stack the remaining cards face down in a pile.

Players must use all five cards to create a sum of exactly 25.

Players go around in a circle. On each turn, they pick up a new card either from the face-down pile or from the discard pile. Players discard one card per turn.

The first player to create a sum of 25 wins.

Remove face cards. Aces are 1. This game may be played by one or more players.

Pick and lay down two cards from the deck.

Subtract the numbers as quickly as possible. Whoever shouts the answer first “wins” those cards.

This game can also be used for addition and multiplication.

We learned this game from MathGeekMama! You can see her full post here.

Aces = 1 and joker = 0. Remove all tens and other face cards. Shuffle the deck and deal each player 6 cards.

Players pick 4 of their cards to create two, 2-digit numbers. The object is to create two numbers that when added together come as close to 100 as possible, without going over.

Players win one point for each round won, and the one with the highest score at the end of five rounds is the winner.

To practice subtraction, subtract 2 numbers to get as close to zero as possible.

Players are each dealt two cards, one for a numerator and one for a denominator.

They then decide whose fraction is the largest.

The winner keeps all four cards, and play continues until the cards are gone

Deal 26 cards, each, to the two players.

Each player picks the top two cards from the stack. The first card is the base and the second card is the exponent. The player with the highest product wins all four cards.

If the products have the same value, the cards are set to the side. Play the next hand normally to find the winner, who will also win those previously set aside.

Play continues until one person holds all the cards or until a set amount of time has passed, to see who holds the most cards.

We first heard of this game from StartatEight.com. You can find more of her Middle School Math games here.

Teams of two people use a deck of cards and some scratch paper and pencils. Face cards = 10 and Aces = 1)

Players decide if they are going to add, subtract, or multiply with the cards they turn up.

Deal out four cards and place them face up.

Using these four cards, create two fractions by making the two largest card denominators and the other two numerators. Use scratch paper to work out the problems.

Learn more from Start at Eight.

Here is another classic you’re probably already familiar with! It’s one that never gets old for us.

Arrange all the cards (minus the face cards) facedown in rows and columns.

Players take turns turning over two cards at a time.

If the numbers match, the player wins the cards and takes another turn. If they do not match, they are flipped back over and the next player goes.

You can get really creative with a simple deck of cards! Practice number orders, addition, subtraction, fractions, and more. What’s your favorite math card game? Let us know in the comments!